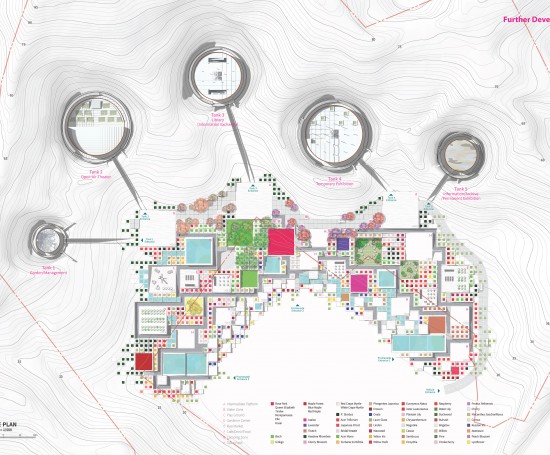 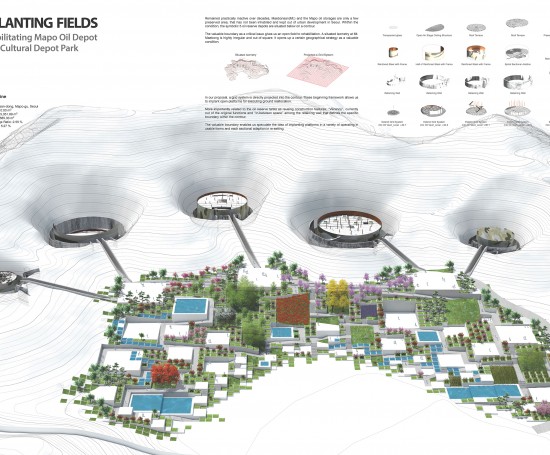 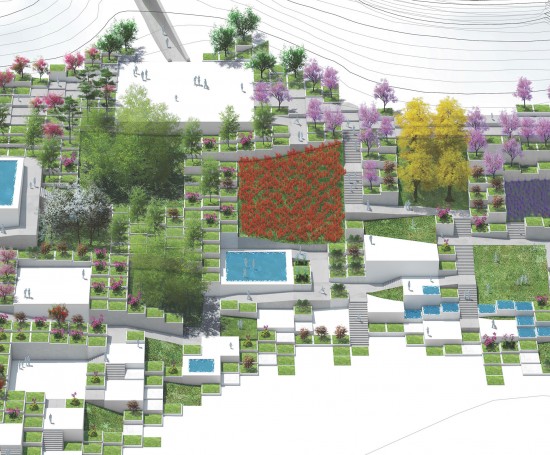 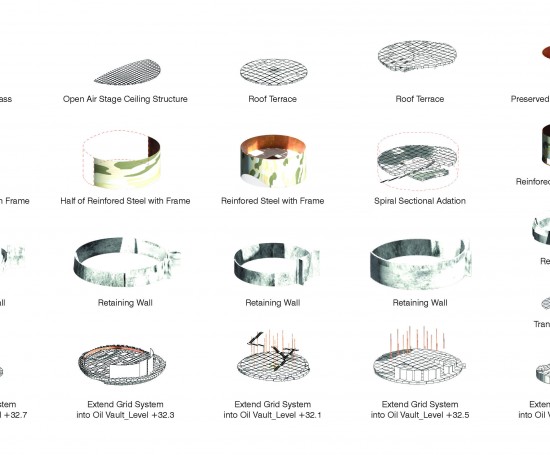 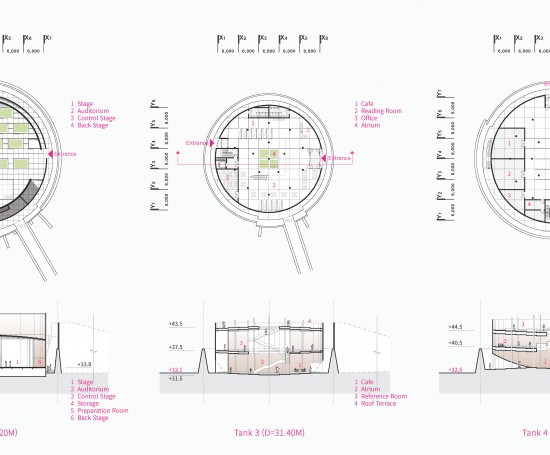 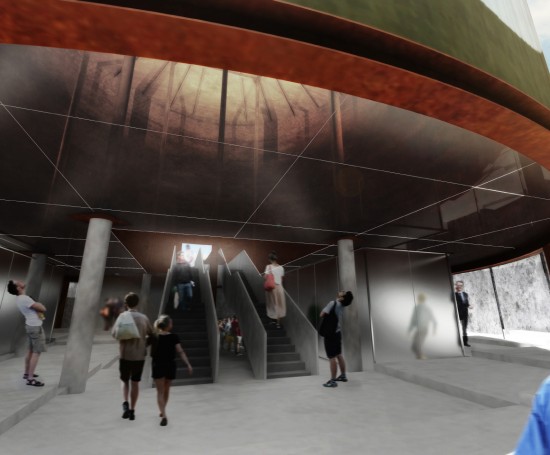 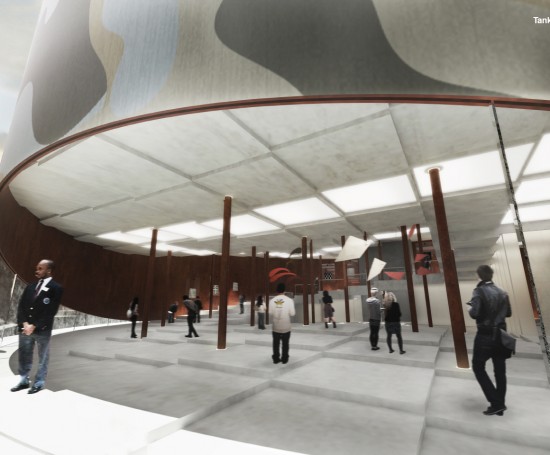 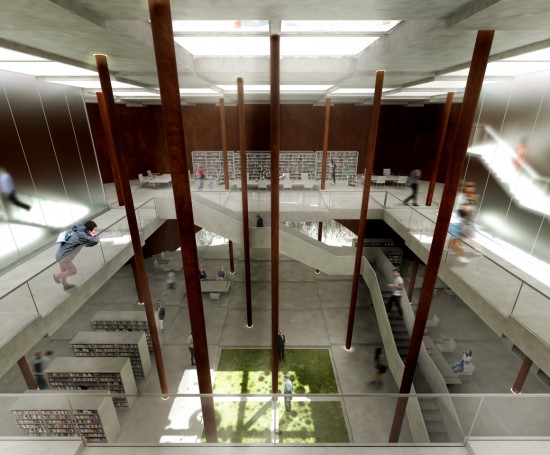 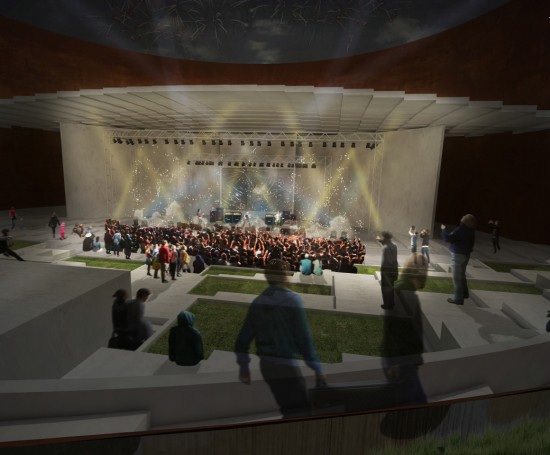 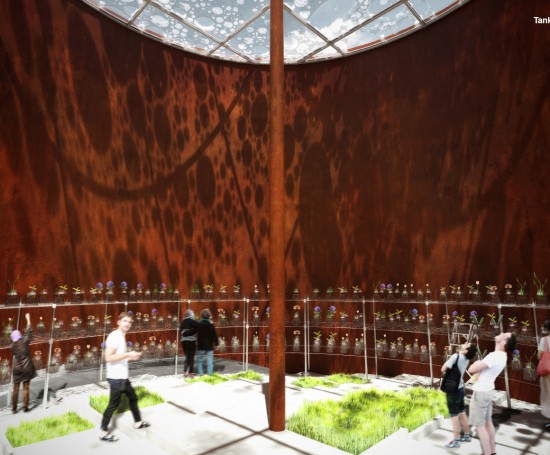 Remained practically inactive over decades, Maebonsan(Mt.) and the Mapo oil storages are only a few preserved area, that has not been inhabited and kept out of urban development in Seoul.

Whthin the condition, the symbolic 5 oil reserve depots are situated below on a contour. The valuable boundary as a critical issue gives us an open field to rehabilitation. A situated isometry at Mt. Maebong is highly irregular and out of square. It opens up a certain geographical strategy as a valuable condition.

In our proposal, a grid system is directly projected into the contour. These beginning framework allows us to implant open platforms for executing ground reallocation. More importantly related to the oil reserve tanks as reusing construction features; “Vacancy”, currently out of the original functions as and “In-between space” among the retaining wall that defines the specific boundary within the contour. The valuable boundary enables us speculate the idea of implanting platforms in a variety of operating in usable forms and each sectional adaption in re-setting.

Throughout providing raised horizontal surface above the level of the surrounding in site, the various cuboid cells has mainly considered, setting up a pleasant environment and easy access of near residents and visitors along with a diverse outdoor activity.

Based on a research regarding the surrounding area’s vegetation group by ecological factors, about distinctive 60 species of planting are widely used to facilitate the understanding of landscape materials. The deliberately implanted plants and trees in landscape offer a pleasant green environment. Depend on the range of cuboid forms, dissimilar species of plants give a certain atmospheric identity on each different route, interacted with visitors.

For pedestrian walkway around with barrier-free consideration, the extensively long slopping walk connecting levels from a main entrance to each oil depot is mainly allocated to foster walk-friendly and safe area in a walking distance. Along with the lamp, the extinctive stages are deliberately envisioned for use; water zone, gardener center, playground, open market, camping area, and service area.

Impractically operated over years, the Oil Reserve vaults that have a rusty inner condition and its supporting structure shows a kind of historicity of the space and architectural creativity value.
In the suggested plan, 5 oil depots disposed with its own programs; Garden(Tank 1), Open-Air Theater(Tank 2), Library(Tank 3), Temporary Exhibition(Tank 4), Information(Tank 5).

Plan
As reusing construction factor, a part of inner wall of oil reserve tank are remained for forming theater stage in front.

Section/Material
Not like reconfiguring a ground floor and ceiling via cuboids in restoring the depots, the vertical objects and materiality of its own are purely maintained for the respect of inner condition with an inner rusty wall and columns.

Ceiling
A transparent glass is covered with a thin layer of oil and water.

Plan
The methodology of implanting a grid system is extended into oil reserve vault for the unity of spatial continuity as ground over the in-between space from landscape area and retaining walls to inside.

Section/Material
Not like reconfiguring a ground floor and ceiling via cuboids in restoring the depots, the vertical objects and materiality of its own are partly maintained for the respect of inner condition with an inner rusty wall and columns.

Plan
As an information exchange center, a centralized spatial configuration is mainly considered within a specific boundary of the oil reserve tank. Rather than having programs in parts of atrium, the distributed cuboid platforms are scattered around the atrium.

Roof Terrace
Forming an open field over oil reserve tank is one of sectional adaption in ground reallocation. It corresponds to a new program of redevelopment of oil tank.

Circulation
The grid system is extended into oil tank depot’s ground platform via the in-between space. Along with the scenery, the spiral circulation is adapted for visitors. Continuous ground setting opens up potential to create a space suitable for temporary exhibition area.

Preservation
A transparent glass directly reflects the preserved oil tank’s structure on ground. Via falling upon a surface into space, the restoring method could be a guide line to bring out past memories and be well corresponed to required programs for re-setting.