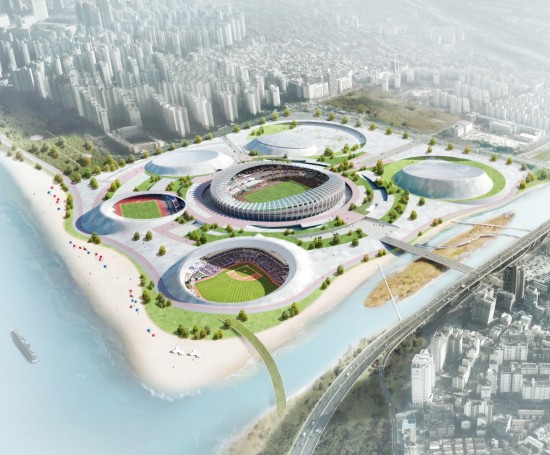 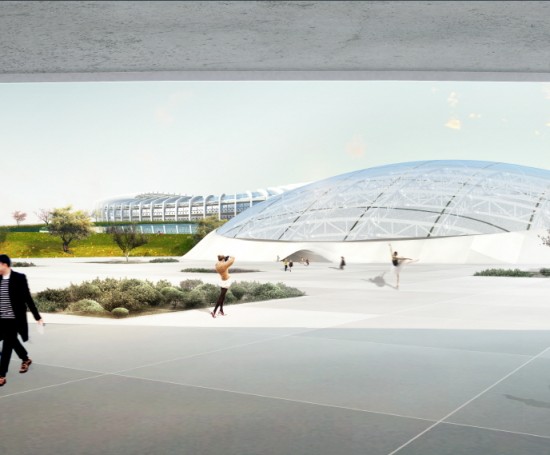 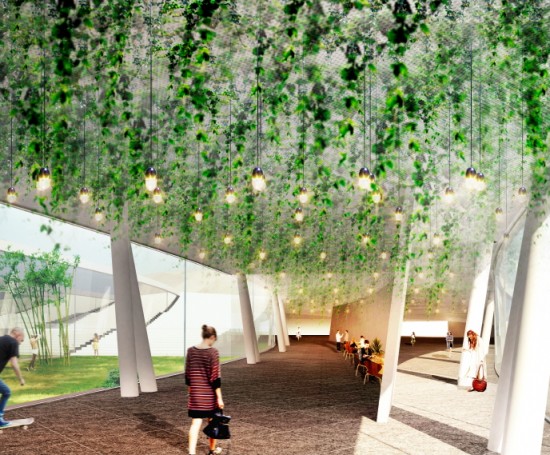 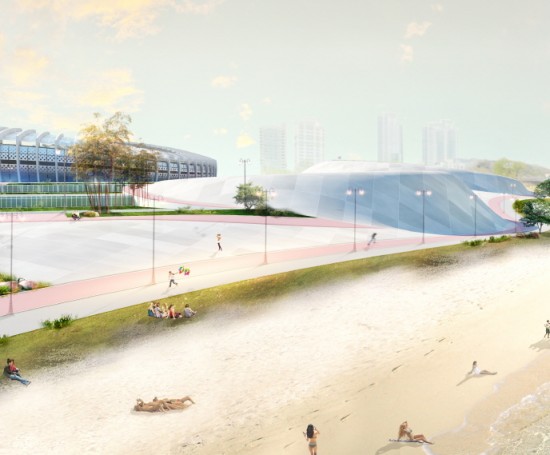 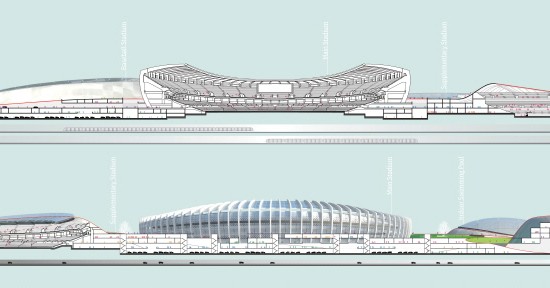 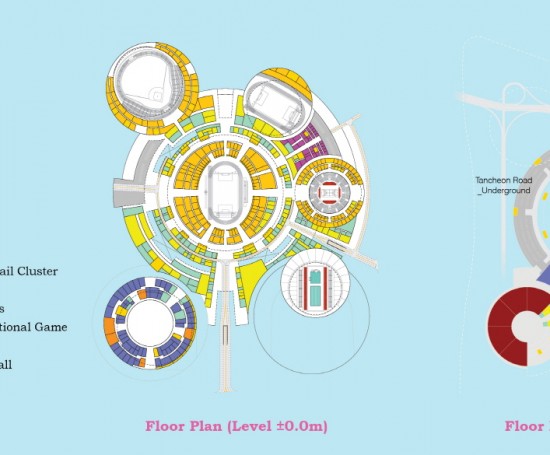 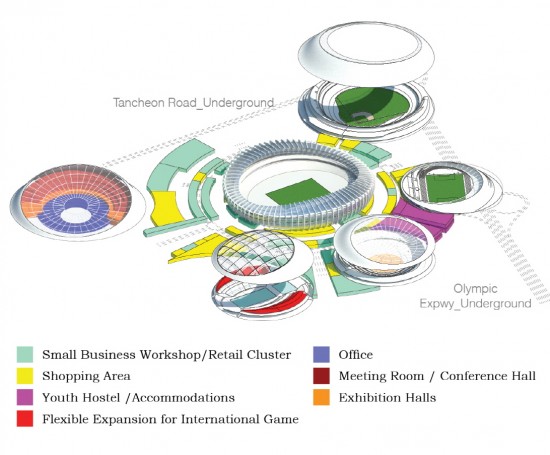 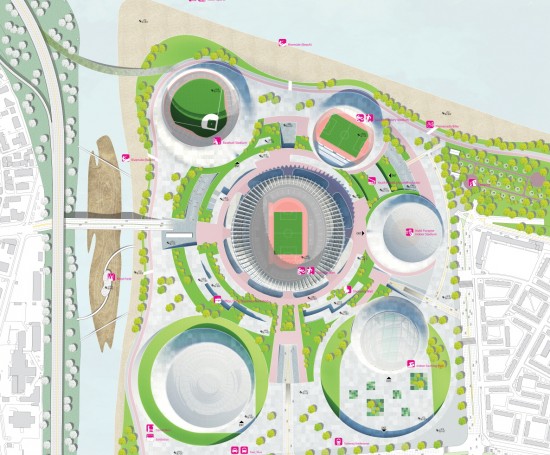 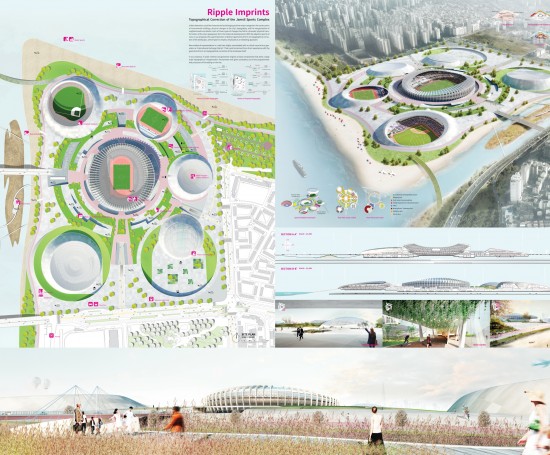 Urban Regeneration of the Jamsil Sports Complex in Seoul

Under the book of Capitalscapes by Matthew P. McKelway, urban alterations could be characterized as belonging to three major categories: the construction of monumental buildings, physical changes to the city’s topography, and the reorganization of neighborhoods and blocks. Each of these types of changes has led to a dramatic physical transformation of the city’s appearance from the historical developments. With the objective points of view, in our proposal, the superimposition of abstract geometrical form on topographical correction of the landscape, Jamsil Sports Complex, employed as an idealizing approach.

After a prodigious development over the last 30 years after 1980’s, highly dense urban blocks in Seoul, such as Gangnam area along with Jamsil Sports Complex, are relatively exposed to low opportunities to gain the natural environment. In spite of the benefits of having the adjacent Han River and Tancheon (a tributary of the River), the neighborhoods and urban sectors are limited to the accessibility to the riverside.

According to the comprehensive ‘2030 Seoul Plan’, a valuable boundary, the Jamsil Sports Complex has confronted with a critical issue to be a generator as ‘International Exchange District,’ consisting of four major functions, which are international business, sports, culture, and entertainment.

In this context, new modes of representation in a site have highly necessitated and that could be derived from direct experience with the geometrical form on topographical correction of the landscape itself.

In our proposal, 6 ripple vertexes are generators as base components that allows a large scale topographical reorganization incorporates and gives consistency to all the programmatic and processes of formatting on the site.

Reed Field as one of the ripple vertexes and medium between the COEX and the Jamsil Sports Complex has been primarily considered in fitting the physical continuity from the urban grid to the proximate surface of the suggested topography.

From the existing sectional condition which is composed of several surfaces with multiple levels in site, our proposal intends to be a generative engine through manipulation of the consistent topography that is a single surface with the integrated multiple sectional layers that accommodate sports facilities, which act as the rest of ripple vertexes, and additional programs: Convention Hall, Small Business Workshop Cluster/Retail Shop, Shopping Mall, and Service Area around the Jamsil Main Stadium.

Another crucial idea of riverside (Beach), that defines the specific boundary within the topography, is deliberately implemented over periphery of the site. The riverside plays a role of pedestrian walkway around with barrier-free consideration and furthermore mainly is envisioned for a zone, such as beaches and water sports.

Utilizing the adaptability of architectural morphology on the manipulation of the consistent topography, we propose a network of circuits that intertwine and create organizational complex landscape to emerge through multiple layers with an inherent quality of interaction.

The central pedestrian and inner corridor for the primary movements on ground level flows as branches into other programs in a row underneath the layered rolling topography.

The circular network around the Jamsil main stadium and sports facilities (ripple vertexes) allows for a gradation of constant programmatic circular paths and a series of performance to the requirements of additional programs: Convention Hall, Small Business Workshop Cluster/Retail Shop, Shopping Mall, and Service Area for each sports stadium.

As a challenge to counter the unique issue that the Jamsil Sports Complex has confronted to be a generator as ‘International Exchange District, our proposal, ‘Ripple Imprints’ had projected to promote a more sustainable boundary with public contents into a urban conversion and provide major sports events and inclusive public destination spaces for social exchange at all levels of participation.

The idea of implanting scale topographical reorganization in a variety of usable forms and each sectional adaption in urban re-setting focuses on redefining the level of the surrounding borders of Jamsil Sports Complex.

A sense of consistent urban conversion throughout the landscape with very specific programs, which intertwines itself, gives easy walkable access of visitors and surrounding residential area along with a diverse outdoor activity and provides connectivity to city’s waterfront.